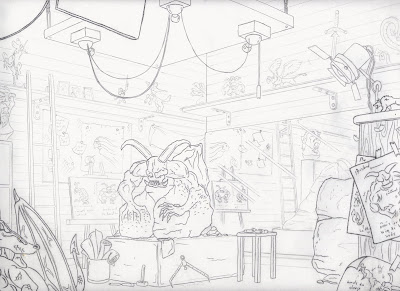 "Sculpture's Studio" In this layout I gave in and tried to darken the objects in the foreground with a special pencil like my professors been telling me too. I never thought I needed to but he knows what hes talking about. Ended up turning out ok.

On a side note: I totally messed up on the line weight in this picture so the dark objects may look out of place but its the light stuff that wrong, not the dark stuff.

I also liked how I figured out a way to add a gargoyle into the pic. haha. 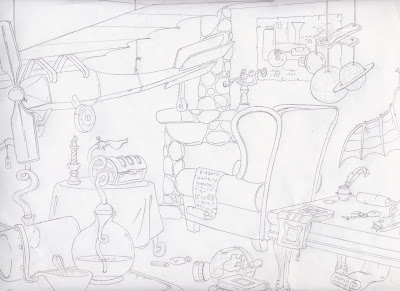 Oh boy...soooo bad. Walls are blank, I covered both floor lines, it doesn't look cluttered; just random. Plus it seems like I forgot everything I knew about line weight (things closer are drawn darker and vise versa) when I drew this thing. Granted I had run out of time before this thing was due, but then again, still my fault.

Hopefully the fact that this is a revision of the crap below may salvage some of my dignity. 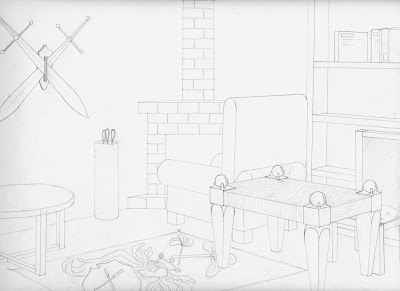 Like I said above, this is the original ''Wizards office" in 2point perspective that I revised to make the above layout. I would beat myself up about it, but I was still learning about layout in general so whatever. Im only posting it so ppl can see the thought process.